The BYU Lavell Edwards Stadium Farmers Market opened for the first time September 23, 2010. The Farmers Market is just one more way that BYU Dining Services is helping the community and supporting sustainability.

Over 25 booths lined the Lavell Edwards Staudium parking lot, selling box loads of locally-grown produce and local goods. Over 50 percent of the booths in the Farmers Market are required to be food booths sponsored by local growers. This requirement helps the Farmers Market stay true to its name by selling goods like peaches, cucumbers, breads, cupcakes and more. BYU Dining Services' own Chef John McDonald also hosts a booth with cooking demonstrations, showing students and other Farmers Market attendees how to use the fresh goods they buy.

"Our goal is to support the BYU community - especially the students - who do not have ready access to homegrown products," said Dean Wright, director of BYU Dining Services. "We promote the concept that for families and individuals, the fresher the food, the better."

Students and faculty as well as community members have a fun, accessible source for good, homegrown goods. Be on the lookout each Fall Semester for the dates and times of the BYU Lavell Edwards Stadium Farmers Market.

Dining Services Director Dean Wright showed the school's commitment to sustainability by drafting a stewardship responsibility statement, with the help of other Dining Services employees.

"It is no small thing to be made stewards of the Lord's house and caretakers of His creations", the statement reads. "BYU Dining Services strives to fulfill this responsibility through the purchase and use of products which are safe for consumption, support local sustainability, and demonstrate a commitment to stewardship. As the Lord has commanded, individuals have the right to their own beliefs and every man or woman should be honored in his or her station, with respect and deference."
The new Commons at the Cannon Center is filled with Energy Star equipment, saving money and using much less power. The new Blue Line Deli in the Tanner Building uses cups, plates and utensils made of recyclable materials.

BYU Dining Services sends less waste to landfills than any other dining program its size. To minimize waste, Dining Services uses food pulpers (like the one shown here) to grind up leftover food, which Grounds then picks up and turns into mulch. This method conserves water and keeps harmful insects away. The recycling at the Missionary Training Center alone saves $33,000 a year on the sewage bill, said Grounds Director Roy Peterman. 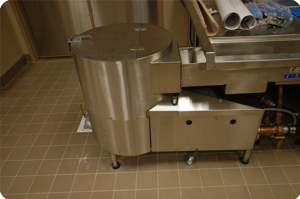 "We're trying in significant ways to protect the resources of the university," Peterman said.

In 2005, the regional bureau of land management recognized BYU with the water conservation award. BYU's water is redistributed to campus by a pumping station at Helaman Halls. The 800,000 sprinklers have a 70 percent efficiency rate. Peterman said that the average home in America is only 35 percent efficient.

Right now, Grounds is converting all of campus from treated to untreated water supplies. This will save the university millions of dollars, and also save Provo city 10 to 15 years in new water development.

Though some colleges require recycling, Peterman said that BYU can only encourage students, faculty and staff to recycle.

"We were given a specific mandate not to make paper shufflers out of professors," he said.

Peterman also said that some schools even charge students for recycling and still don't break even. BYU will begin plastic recycling in September, sending bottles to a facility in For Hall, N.M. Although the cost of recycling plastics will be high, it will be offset by the profits of the other materials BYU recycles.

"You won't find as comprehensive a recycling and conservation program as there is at BYU," Peterman said. "The whole campus is an arboretum."

"Our focus is on getting the most harmful things out of the waste stream," Peterman said.

Since 2004, BYU has participated in the Recycle Mania program. The competition began in 2001 between Miami and Ohio University. Now, over 400 colleges participate.

To find out more about recycling at BYU, visit dining.byu.edu/byu_dining_recycles.htm.